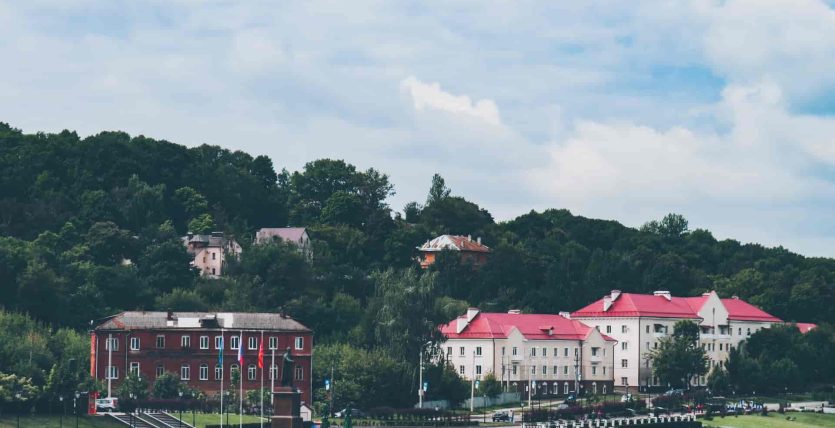 Smolensk is a beautiful Russian city located in European part of the Russian federation. It is also the administrative center of the Oblast of the same name. And It is just about 360 kilometers southwest of the capital Moscow.

In the past, Smolensk was a key station on the trade route from the Varangians to the Greeks. The Rus people sailed from the Baltic region up the Western Dvina River as far as they could, they portaged their boats to the upper Dnieper. Then they supposedly mended any leaks and small holes in the current location of Smolensk by using tar to do that, hence the city name.

Because of  its location on the invasion routes of the Mongol Empire, Polish-Lithuanian Commonwealth, Tsardom of Russia, First French Empire and lately Nazi Germany, the walled city was destroyed several times throughout its long history.

Where did Smolensk get its name?

The city is located in European Russia on the banks of the upper Dnieper River, which crosses the city within the Smolensk Upland, which is the western part of the Smolensk–Moscow Upland. The Dnieper River flows through the city from east to west and divides it into two parts: the northern (Zadneprove) and southern (center). Within the city and its surroundings the river takes in several small tributaries.

In the valleys are stretched streets, high ridges, hills, and headlands form the mountain. Smolensk is situated on seven hills (mountains). The old part of the city occupies the high, rugged left (south) bank of the Dnieper River. The area features undulating terrain, with a large number of tributaries, creeks and ravines.

The city has a number of memorable historical and architectural monuments, for instance: the fortress, the church of resumption and many other beautiful places:

Smolensk Kremlin is an architectural monument protected at the federal level which is a fortress encloses the center of the city of Smolensk. The fortress wall was built between 1595 and 1602, during the reign of Tsars Fyodor I Ioannovich and Boris Godunov. The length of the walls is about 6.5 kilometres, but now only the less than the half remains.

Architect Fyodor Kon oversaw the construction of the fortifications. The Smolensk Kremlin has a great historical significance, in particular, as the fortress protecting the Russian state from the west over centuries, and it’s also one of the greatest achievement of Russian medieval architecture and military engineering.

The church of resumption:

You can read more about Russian cities.

Kaliningrad – the city of kings
Previous Post Next
× How can I help you?