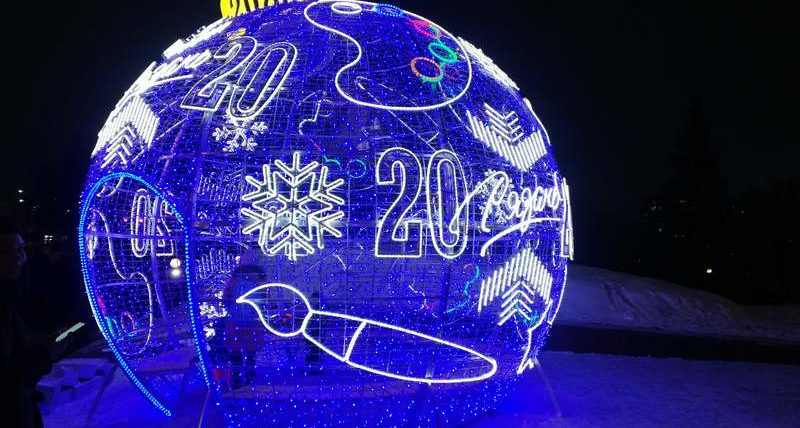 Ryazan: New Year … What feelings does this holiday evoke in you? In my head immediately snowstorms, gifts and gatherings with loved ones. Isn’t it wonderful? This holiday is eagerly awaited all year by both children and adults. It is on this night that miracles happen, wishes come true. Peace of mind is filled with peace of mind, peace and, at the same time, delight. The spirit of the festive atmosphere is in the house.


It is precisely this situation that surrounds our Ryazan this year, because it is the New Year’s capital of 2020!
“New Year’s Capital of Russia” is a project of the Ministry of Culture of the Russian Federation, created in 2012 with the aim of developing domestic and inbound tourism. Every year, the city is chosen, which will be the next New Year’s capital. January 7, 2019 Ryazan received a snowflake from Tula, which is a symbol of the project.


Despite the lack of snow, Ryazan literally from the first second took the baton. They organized a large-scale parade of Santa Clauses and other beloved New Year heroes. Over 2200 people took part in this action!
The parade was led by Santa Claus from Ustyug, riding in a white convertible. The participants reached Lenin Square, where they all gathered in the end: our characters met with guests from Yakutia. From this moment the fun begins: a fire and laser show, a flash mob of dancing, a festive concert!
Ryazan received many guests from different regions of our country, which is not surprising, because it is famous for historical monuments and attractions.

We prepared thoroughly for the New Year month in Ryazan. We chose the symbols of the upcoming New Year – Avdotya Ryazanochka, Fun Putyatishna, Evpatiy and Ryazan Kosopuz. They meet and treat guests.

We paid special attention to the treats: they chose a guelder-rose with a festive taste. This is a dessert made from rye, wheat and bird cherry flour, the filling is made from viburnum jam.

Drinking was also given the honor to present “Taste of Ryazan.” The drink of the same name can be ordered in cafes and restaurants. It is prepared according to an original Russian recipe: from St. John’s wort, Ivan tea, ginger, sage, eucalyptus and thyme.

What places to visit in Ryazan?
Fortunately for you, in Ryazan there are a lot of options for a rich cultural holiday:

Ryazan Kremlin is a must-see place. It is surrounded by a beautiful promenade, and on its territory is a historical and architectural museum-reserve.

The resort village of Solotcha.

It is located in the suburbs of Ryazan. People come there from different parts of Ryazan and Russia, because here you can improve your health and relax with your family. The village is surrounded by coniferous forest, in the territory of which there is another famous place –


This is one of the oldest museums in Russia. His collection includes works by Western European masters (mainly from the 15th to 20th centuries) of various types and genres of art.


It is located in the village of Izhevsk. The museum’s exposition provides a detailed description of the scientist’s scientific activities, as well as different periods of his life.


The only one in Russia and one of the 14 biosphere reserves in the world. There are about 250 species of birds, 60 species of mammals, and 40 species of fish. It is the natural environment that will allow you to enjoy a walk and look at animals without harming them.


one of the main points of any tourist. The museum is located on the banks of the Oka River in the village of Konstantinovo, where the poet was born.


Ryazan has a rich, full of historical events, past, which stretches from ancient times. Not every city in Russia can boast of such abundant genesis. The words “Ryazan” and “Ryazan” have already become synonymous with the indigenous inhabitants of Russia.

A report from the moment of “birth” of Ryazan has been going on since about the 11th century, just with the arrival of the East Slavic immigrants. At first it was called Muromo-Ryazan land, later from which the Ryazan principality stood out. But after the destruction of Old Ryazan (the capital) in 1237 by the Tatars-Mongols, as well as the subsequent invasions of nomads, its place in the principality was taken by Pereyaslavl-Ryazansky, which was founded, presumably, in 1095. (To be more precise, the first mention in the annals refers to the above date). In 1521, it became part of the Moscow state, and in 1708, in the Moscow province. But then it was renamed to Ryazan.

In the XVII-XVIII centuries, the territory of the state gradually expanded to the south and east. Ryazan Territory became the central province of the Russian Empire. Ryazan land consisted of a large number of cities, villages and villages. The historical and cultural center was the Kremlin, which is located on the northern border of the city. Another prominent building is the Assumption Cathedral, built at the end of the XVII century.

The result of the technical and artistic heyday of urban craft were the masterpieces of Ryazan masters. In 1992, a treasure trove of gold jewelry was discovered during excavations at the Staro-Ryazan settlement. The technique of making various jewelry is well studied. They represented their image in their head, then embodied it materially. Artists in the Middle Ages invested in their product not only the soul, but also patience.

At that time, there was a unified system of communication in society, but the mentality of each professional group had its own specifics. The world view then was based on the fact that everything that the Most High created in the world has visible beauty. From here comes the pursuit of excellence. That is how the masterpieces of craft arose.


Ryazan can also be proud of its natives, because they are talented and ingenious people:

The previously mentioned Sergei Alexandrovich Yesenin, the great Russian poet. He was born in the village of Konstantinovo, in a peasant family. It is unlikely that someone did not hear about him; children from school benches know him. His innate talent was reinforced by religious imagery and a melancholy nature. Sergei Yesenin is a real treasure of the Ryazan Territory.

Pavlov Ivan Petrovich — world-famous physiologist, academician, and Russia’s first Nobel laureate in medicine (1904). The work of I.M. Sechenov. Later, Ivan Petrovich developed the method of conditioned reflexes. It was these studies that influenced the development of medicine and physiology, as well as psychology and pedagogy.

Skobelev Mikhail Dmitrievich, a well-known commander, commander. Despite the fact that the parents wished their son a different education, having determined him for the Faculty of Mathematics, he was destined for the fate of the General and the St George Knight. After the Russian-Turkish war (1877-1878), Mikhail Skobelev returned as a real national hero with recognized military authority.

Michurin Ivan Vladimirovich – Russian breeder and botanist. Born in the family of a nobleman. From early childhood he loved to consider his garden and plants. He collected collections of plants, and also bred new varieties of different crops. In 1923, his nursery was recognized as an important public institution. Michurin made a great contribution to the development of genetics and berry crops.


Modern Ryazan is the administrative and historical center of the Ryazan region, which is located on the right bank of the Oka River. It is one of the thirty largest cities in Russia. Located about 200 km from Moscow.
The area of ​​current Ryazan is 223.7 square meters. km

The total population of Ryazan for 2018 is 540 thousand people.

Ryazan is one of the most important transport hubs in the Central Federal District, through which the main railways and federal highways pass.

Ryazan is a modern city. Today it has more than 19 thousand enterprises and organizations. This is a fairly educated city. It has the All-Union Scientific Research Institute, the Radio Engineering, Pedagogical and Medical Institute, as well as 11 secondary specialized educational institutions.

The cultural life here is quite diverse: several museums, music, drama and puppet theaters. In addition, every day various events are held for different social groups and age categories. That is why there are many tourists in Ryazan who are interested in history and admire the architecture of the glorious city.

Happy New Year, we are waiting for you to visit!

Travel to Russia for new year’s eve 2020 and Christmas
Previous Post Next
Leave Comment
× How can I help you?