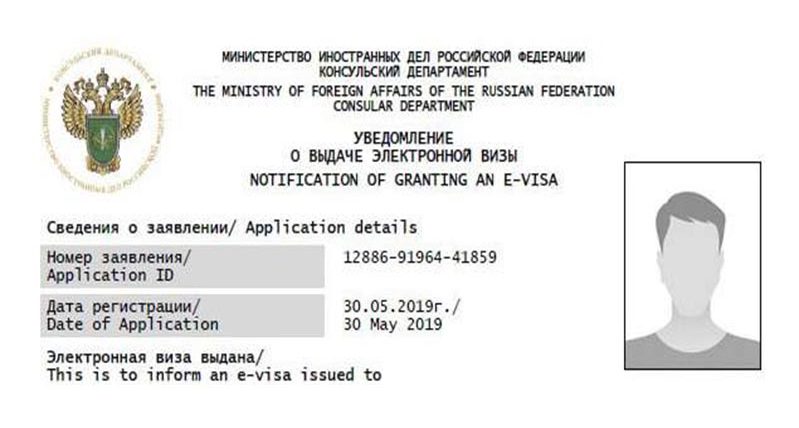 Development of an electronic visa issuance mechanism in Russia

The tourism industry in Russia is waiting for the digital revolution. In the coming years, changes are planned in the procedure for tourists entrance aimed at increasing the loyalty of the visa system. The first step towards is the introduction of electronic visas.

The benefits of e-visas for tourists are obvious. There is no need to personally attend the consulate and lose time submitting documents. It is enough to fill out an application on the Ministry of Foreign Affairs website on time and wait for a positive decision.

At the moment, the project is at its initial stage.  An e-visa can be already obtained to enter some regions of Russia. It must be done no later than four days before border crossing. The e-visa is valid for a month, yet the permitted period of residence in the region of entry is only 8 days. It includes the day of arrival and departure. So far, such visa is issued free of charge, and involves residence only in a specific region.

It is a step forward to Russia. The introduction of an e-visa will make the state more open for tourists. Russia is a promising area with a sufficiently developed infrastructure for tourism. There are many exceptional tourist destinations, the attendance of which leaves much to be desired due to the complexity of entry visas getting. For citizens of most states the process remains bureaucratically complex. It reduces the competitiveness of Russia in the eyes of tourists.

Many countries have a wide list of partner states whose citizens do not need a visa. Thus, residents of Europe and Japan can visit more than 180 countries without applying for a visa. At the same time, tourists visiting Russia respond to obtaining a visa unflattering. At the same time, tourists visiting Russia are negative towards getting a visa. In addition to the main difficulties of the bureaucratic process, in practice it is unduly delayed.

Which regions are already eligible for e-visa entry

An online service that allows a tourist to get a visa to visit certain regions of Russia began its work in 2017. For 2.5 years, according to this system, Far Eastern Federal District can be entered. In the summer of 2019, the Kaliningrad region was included, and later in the fall – the Leningrad region.

Citizens of eighteen countries, most of which are Asian states, can get an e-visa to visit the Far East. For the other two regions, the list is wider. Citizens of fifty-three countries can visit the Kaliningrad and Leningrad regions by applying for a visa via the Internet. Among these states are many countries of Europe and Turkey.

With the introduction of the system the number of tourists in these regions has increased. For 2.5 years, an e-visa to visit the Far Eastern Federal District was issued by more than 100 thousand people. After 3 months of the system operation in the Kaliningrad region, 40 thousand people benefit from it. And in last year fall, 14 thousand foreigners visited St. Petersburg and the Leningrad Region on a simplified procedure.

On the website of the consular department of the Russian Ministry of Foreign Affairs there is a list of air, sea, railway, automobile and pedestrian checkpoints that can be used by foreign citizens who have received an e-visa.To cross the Russian border at other permitted places, a visa must be got through the consulate. Thus, for example, it’s forbidden to come to Russia by train, having issued an e-visa via the Internet.

The Ministry of Tourism appreciates such experience and plans on expanding the list of regions connected to the system. In 2020, Karelia, Altai and Krasnodar Territories are expected to be connected to it. This is part of the federal project “Export of Services”, one of the aims of which is to significantly increase the tourist flow to Russia. The list of regions can be expanded after project committee discussion.

How to get an e-visa to enter Russia

The application is issued on the website of the Ministry of Foreign Affairs of the Russian Federation. To apply for a visa, a valid national passport, a computer with a supported browser and enabled JavaScript, as well as a program that allows you to view and print PDF files are needed.

The system will ask a number of questions, each has a clue explaining the meaning. Filling out must be done in the language selected on the site.

After consent to the processing of personal data and registration, it will be possible to proceed with filling out an application. Required fields are marked with asterisks. After uploading a photo in JPEG format that meets the requirements of the site the application can be submitted. If everything is done correctly, a confirmation message on the acceptance of the application for processing will be displayed. It is considered no longer than 4 days.

The status of the application can be tracked on the site. Notifications of all changes will be sent to the email address provided during the registration process. A positive decision must be printed out to present it to border guards. The necessary information can be also provided in electronic format. If the application was refused, the Russian consulate can be contacted to clarify the information. In the meantime, you can safely issue a visa invitation to Russia.

What changes are planned in the issuance of e-visas

The Federation Council declares for a phased connection of other entities to the system and the expansion of the list of states whose citizens can enter these regions with an e-visa. It is also planned to abolish the restriction, according to which, foreigners can now only be in the region into which they entered.

In the summer, Vladimir Putin instructed to ensure the introduction of a uniform e-visa from next year. It will be a single entry visa. The planned duration of residence is 16 days. After the introduction of these changes, foreigners will be able to apply through the Internet to enter any region of Russia. The list of states whose citizens will be able to apply for a new digital visa has not been approved yet. But it is likely to be wider compared to the one that is already operating in the pilot regions.

The new e-visa will no longer be free of charge. It is assumed that the tourist applying for it will pay an amount not exceeding $50. This step is necessary in order to stop issuing visas without the purpose of entry for personal interest.

The prospect of a multiple e-visa introduction is currently being discussed. It is also planned to create a mobile application that will make visa processing as convenient as possible. Its functions will include both filling out an application and payment. The service will be integrated with other electronic travel services, for example, hotel reservation and ticket purchase.

For free entry through all checkpoints, they will need to be equipped with special equipment, therefore, at the first stage, entry with new electronic visas will be through cities where the flow of tourists is highest. A sequential increase in the number of points of entry is planned.

To freely enter all checkpoints they will need to be equipped with special equipment, therefore, at the initial stage, entry with new e-visas will be through cities where the flow of tourists is highest. A consistent increase in the number of points of entry is planned.

The algorithm for issuing new e-visas has already been developed. But for its implementation, it’s necessary to make an agreement with security authorities and local authorities of all regions. Therefore, the system will begin to work no earlier than 2021.

Russian officials note that the development of inbound tourism is necessary not only for the economy, but also as a diplomatic action. Tourists who visited Russia in 2018 saw with their own eyes the state of affairs in the country and became convinced of the absurdity of many myths about Russian people.

In Russia one of the most liberal visa regimes is planned to be introduced. However, a list of states whose citizens will not be able to use the new e-system has already been announced. These are the United States of America, Canada and the United Kingdom.

Visa to Russia for foreigners

Began Rusian visas and traveling only for flight and marine crews
Previous Post Next
× How can I help you?