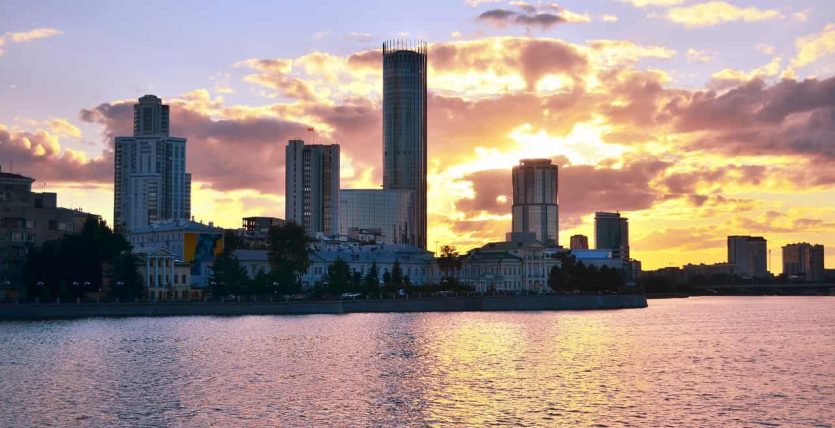 In this paragraph, we will explore the largest city in the Ural region and the third capital of Russia! Join us on our trip, and read more about the beautiful city of Yekaterinburg! let’s start it!

The city is located in Eastern Europe between the Volga-Ural region and Siberia, it is on the eastern side of the Ural Mountains. The Iset River flows through Yekaterinburg from the Urals to the Tobol River and divides the city.

It is the largest city and the administrative center of Sverdlovsk Oblast and the Ural Federal District in Russia. Yekaterinburg is located 1,667 kilometers east of the capital, Moscow. With a total area of ​​495 square kilometers.

The city possesses a humid continental climate with well-marked seasons. The weather in Yekaterinburg is characterized by sharp temperature fluctuations and weather anomalies: in winter, from frost at -40 °C to thaw and rain: in summer, from temperatures above 35 °C to frosts.

Yekaterinburg has a population of about one and a half million inhabitants, so it is the fourth largest city in Russia! As well as one of the main cultural and industrial centers of the country. We can say that Yekaterinburg is the “Third capital of Russia”, as it takes the third place by the size of economy, culture, transportation and tourism.

Yekaterinburg is one of the most important economic centers in Russia, as it served as the mining capital of the Russian Empire as well as a strategic connection between both of Europe and Asia. The city is currently experiencing an economic and population boom. And therefore, you can see some of the tallest skyscrapers of Russia being located in it.

On the other hand, Yekaterinburg was one of the host cities of the 2018 FIFA World Cup, and will host the 2023 Summer Universiade.

Yekaterinburg is also a leading sports center in Russia. A large number of well-known athletes, both world and Olympics champions, are associated with the city.

And if you are a sports lover, we have some good news for you ! There are many sport attractions in this city, such as: The Central Stadium, Yekaterinburg Sports Palace, SKB-Bank Arena and Palace of Sporting Games.

In addition to these important sport attractions, Yekaterinburg has a total of 1728 sports facilities, including 16 stadiums with stands, 440 indoor gyms and 45 swimming pools. There are 38 sports children’s and youth schools for reserves for the Olympic Games, in which more than 30,000 people are participating.

And of course, don’t forget the special event in 2018, when the city was one of the eleven Russian cities that hosted the 2018 FIFA World Cup. however, the matches took place in the upgraded Central Stadium.

Railway and airports in Yekaterinburg:

Yekaterinburg is a major railway junction. The Perm–Yekaterinburg–Tyumen section is now part of the main route of the Trans-Siberian Railway (TSR).

On the other hand, There are also two primary airports serving the city: Koltsovo International Airport (SVX) and the smaller Yekaterinburg Aramil Airport. Koltsovo Airport is one of the largest airports in the country, and it is the sixth busiest airport in Russia!

Read this paragraph, and learn more about one of the greatest railway lines in the world: the Trans Siberian railway TSR.

And you can also read more about the beautiful Russian cities

Tourism in Moscow and the Moscow Region – Russia
Previous Post Next
× How can I help you?