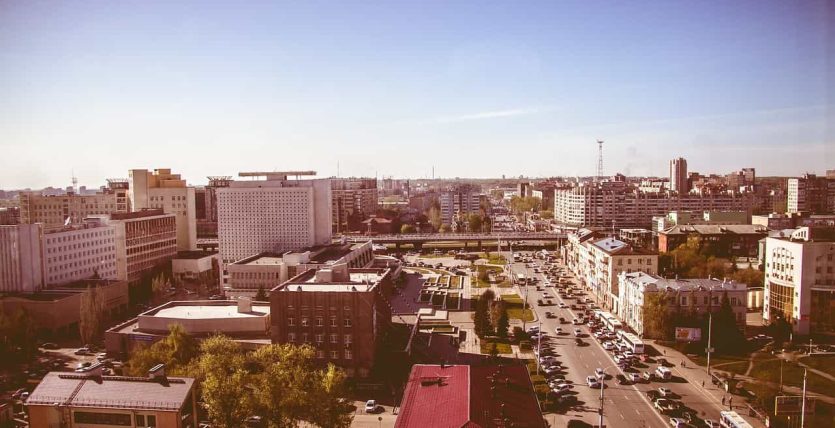 Read about the city of Omsk which is the second largest city in Siberia region! Learn more about its geography, climate, nature life and many other interesting information.

Omsk is located in the south of the West Siberian Plain at the confluence of the Om River with the north flowing Irtysh River, 150 kilometers from the border with Kazakhstan.

There are two large rivers flow through the city, many small streams, as well as lakes and canals. The length of the Irtysh River within the city limits is more than 25 kilometers.

At its highest point, the city has an elevation of 87 meters above mean sea level.

What kind of climate does Omsk have?

The direction of the wind is southwest in winter, northwest in summer. The highest wind speed is recorded in both winter and spring.

On average, the city sees over 300 sunny days a year, the maximum length of the day is 17 hours 21 minutes, and the minimum is 7 hours 10 minutes.

Although it is not typical in this city, oaks can still be found. Particularly, in the park, which is next to Omsk State Agrarian University and in the park of Omsk State Technical University, as well as opposite, next to the Palace of Creativity. For more than 20 years, oaks have been growing in the Fifth Small District on the Left Bank and in the Leninsky District on the street Serial X.

In Omsk, you can find several species of birds including the Vagrant species of Dalmatian pelican, Black Stork, Flamingo, Owl and Black Crow, as well as many blackbirds. Moreover, on the streets of the city there are many doves and sparrows. Ducklings sometimes run out on the road near green areas, forcing motorists to stop and wait for the chicks to get to a safe place.

This city hosts sporting events of various levels, from children’s arena to global. Among the most popular mass athletics events are the International Siberian Marathon, the Omsk Half Marathon and the Christmas Half Marathon.

The Omsk Ice Arena (2007-2018) hosted the matches of the Vostok group and the final of the international children’s championship of the Gazprom Neft Cup for KHL children’s teams, one of the largest children’s hockey competitions in Europe.

Moreover, the 2023 IIHF World Junior Championship is due to be hosted by Novosibirsk and Omsk.

How easy is it to get to Omsk?

Omsk is a main transport node. The city is serving as a train station for the Trans Siberian railway and as a essential river port.

In addition to above, Omsk is an important aviation hub for Siberia and the Russian Far east. As the Tsentralny Airport serves the city, and offers access to domestic and international destinations.

Omsk is a large cultural and sports center in Siberia, there are active theatrical activities and exhibitions. In addition to the major local and international events such as: The Siberian International Marathon, international hockey tournaments, all-Russian equestrian competitions which are held in this beautiful city.

Learn  more about the longest railway line in the world Trans-Siberian railway (TSR).

And you can also read more about the beautiful Russian cities

Tobolsk: One of the historical capitals of Siberia
Previous Post Next
× How can I help you?