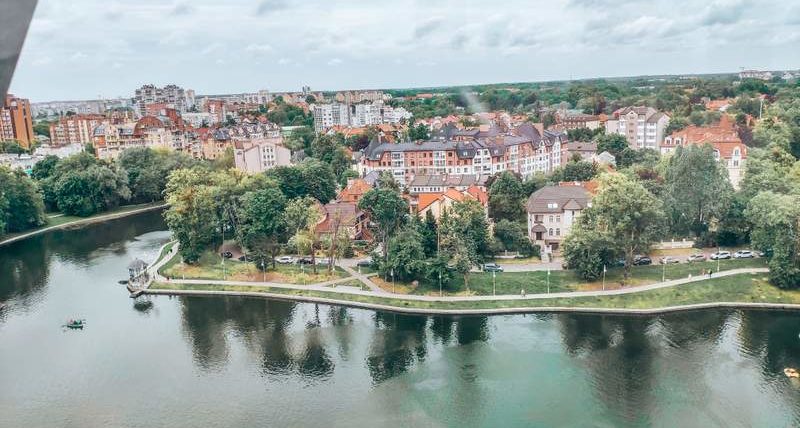 The city of Kaliningrad was formerly Koenigsberg. The former capital of eastern Prussia, as the people say the city of kings. The architecture of the Teutonic Order is intertwined with modern buildings.

In the present history of the modern world, Kaliningrad is a subject of the Russian Federation and the westernmost point of the country.

The city has 1 million inhabitants and is divided into 3 districts: Leningrad, Central and Moscow.


The central region is a historical part of the city, where the buildings of the Kant era, which was born here in 1724 and this part of the city, are most attractive for tourists to this day. By the way, if we talk about tourists, then according to statistics, 1.8 million people visited Kaliningrad in 2019, which does not plead with its dignity as a tourist city.

The Leningrad region of Kaliningrad is very popular among the local and visiting population as a place to live. In this area, a measured calm life from the bustle.

Moscow or as it is called by locals Balt district. From the central and Leningrad regions it is divided by the Pregol river. During the war, it was badly damaged and the post-war years were engaged in its restoration. Here is the administration of the seaport of the Baltic Sea. A bewitching sight.

The city is very interesting for its streets and paved roads, which is its amazing story with its riddles and secrets. There are many legends and stories about Koenigsberg, the most masterpiece is that under the upper pond is the entrance to the underground city, and to enter it you must drain the upper pond.

In the center of the city there is an uncomplicated building “House of Soviets” an abandoned building, which they promise to demolish or reconstruct, it was built on the site of the former castle and in recent years the building sank to 2 floors. The symbol of Kaliningrad is now considered the Victory Square in the city center.

30 minutes by train and enjoy the Baltic Sea and the freshness of the sea air.

From Kaliningrad to parts of Europe

Kaliningrad is also excellent as a point for traveling around Europe. You can rent a car and hit the road to a nearby European country from the city center and get in an hour.

Life in the city is measured and calm. The city’s favorite place is walking around the upper pond, the place is very calm and beautiful. Here you can meet street musicians, poets and various creative personalities who will cheer you up.

About places of Kaliningrad

If we talk about the places of Kaliningrad and recommendations where to go and what to see, then it takes more than one month. It is best to see once than hear a hundred times about the most mysterious and mysterious city in Russia. 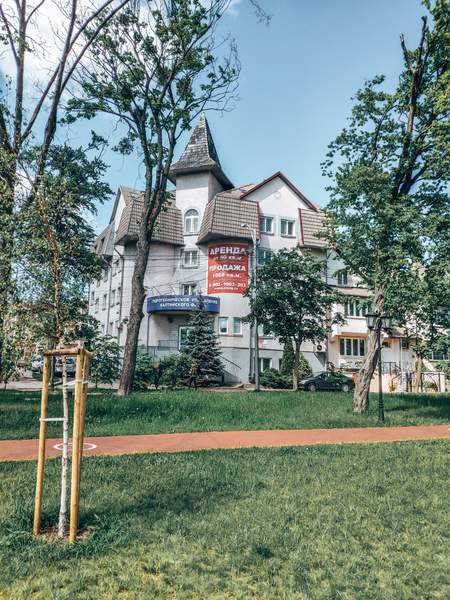 2- When walking around the upper pond along a paved stone road, incredible buildings of elite private houses open up. Sensation as if we were in the most comfortable corner of the city. 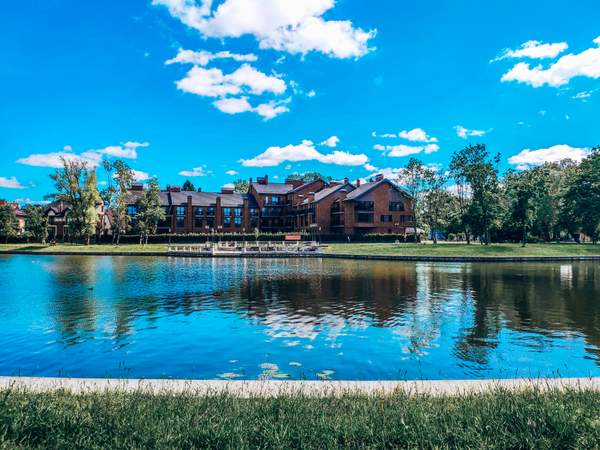 3- Upper Pond. If you go around the upper pond, then your eyes will see the modern construction of new Townhouses, which visually seem somehow fabulous. 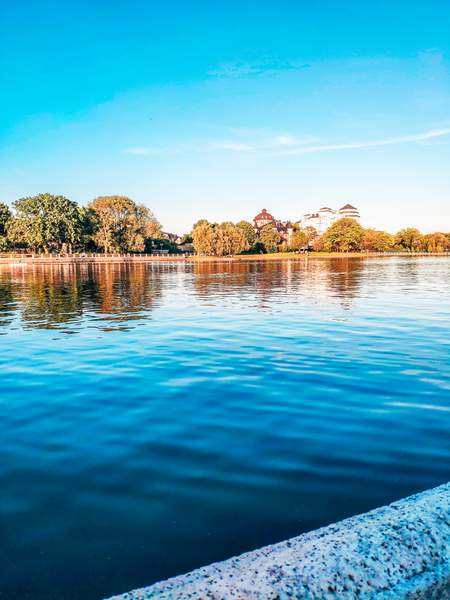 4- Smooth the upper pond. Why is the upper pond considered the favorite place for residents and visitors of the city? The answer is simple, incredible expanse, calm, noiseless atmosphere makes this place one of the most beautiful places in the city. 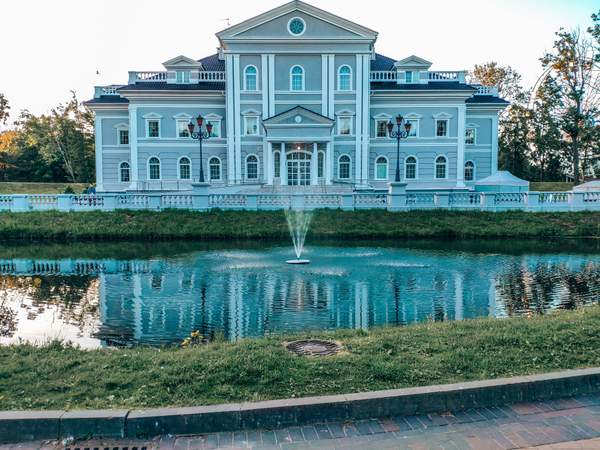 5- Park Youth. In the center of the park there is a building of interesting architecture “Marzipan Museum” in front of the building there is a small pond with a fountain where ducks swim, fed by visitors to the park. 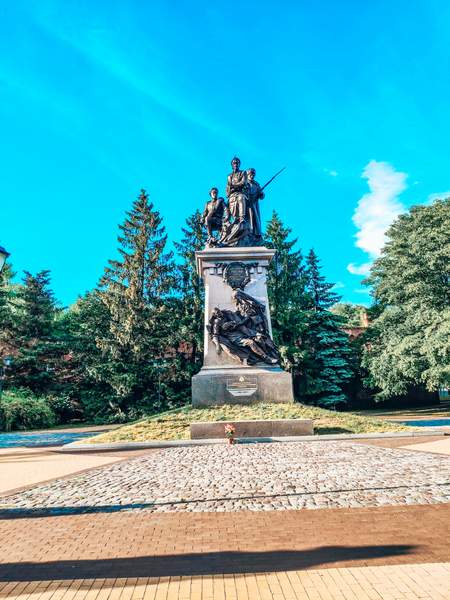 6- Monument to the wars of the Russian imperial army. The monument is surrounded by firs and pines, which gives this composition a bewitching effect. Behind the monument is the Astronomical Bastion, which is a must-see. 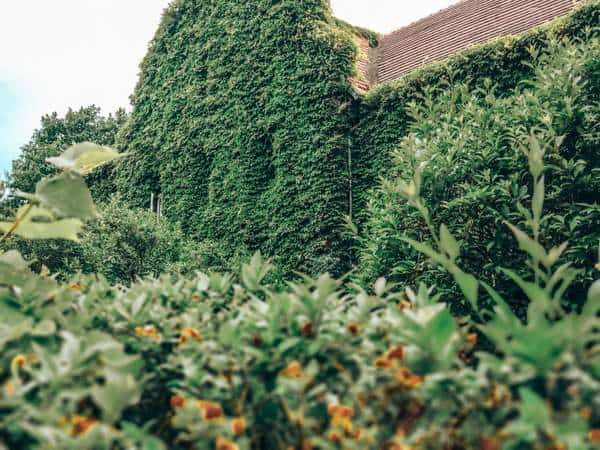 7- The building on the street of the Small Guard. The building looks like an impregnable fortress made of green spaces, nature has done everything, and the building is even more fascinating. 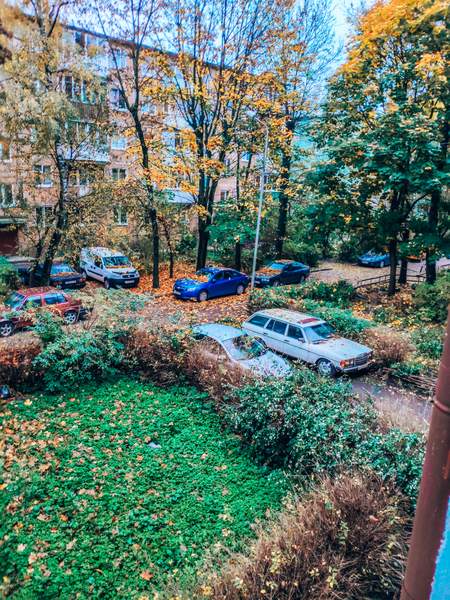 8- The view from the window along the street Minskaya 6. Standard Kaliningrad autumn. Outside the window is saturated greens, and in the courtyard ending November. 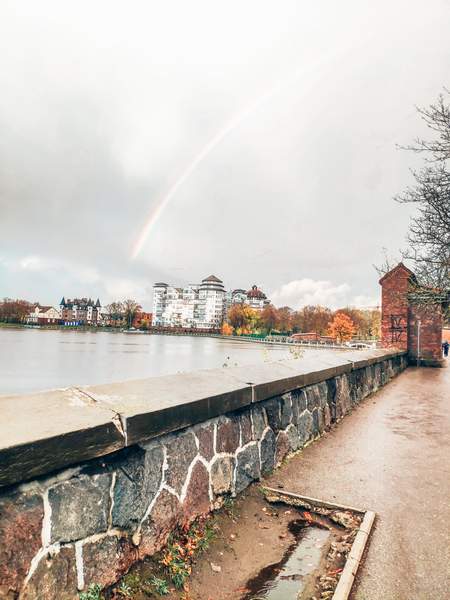 9- Near the Amber Museum. The weather in Kaliningrad is unpredictable. The warming sun went out for a walk and 10 minutes passed and it rains and after that there is always the brightest rainbow, especially on the upper pond. 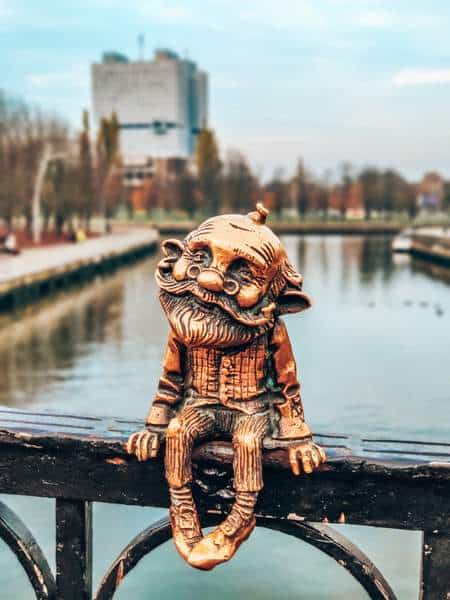 10- Fishing Village. On the bridge sits Khomlin. This is a creation of architects of the Kaliningrad region, there are a lot of such statuettes in the city and in different places. 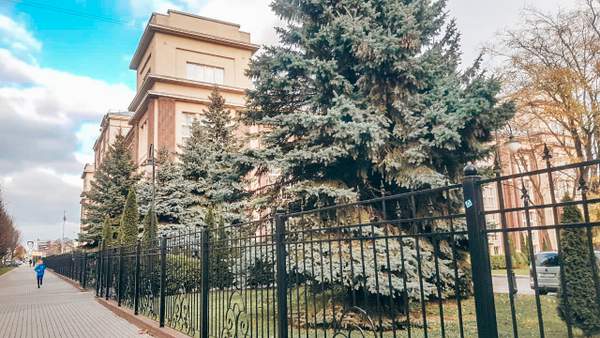 11- Palace of creativity of children and youth on the lower pond. The building is surrounded by beautiful plantings and overlooks the sidewalks of the pond, where swans often swim. 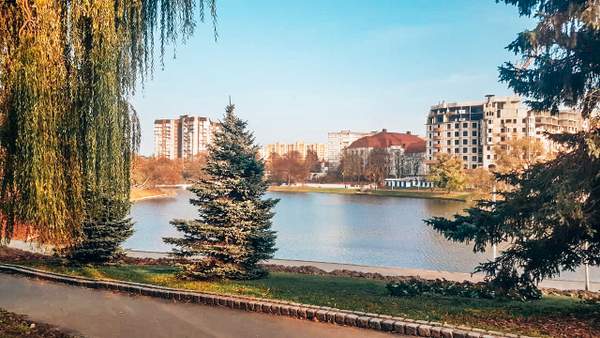 12- Rosgarden. If you move along Sergeyeva Street to the right, there is a lower pond, and behind it is the construction of the Rosgarden housing complex, a futuristic modern residential complex will undoubtedly decorate the city center. 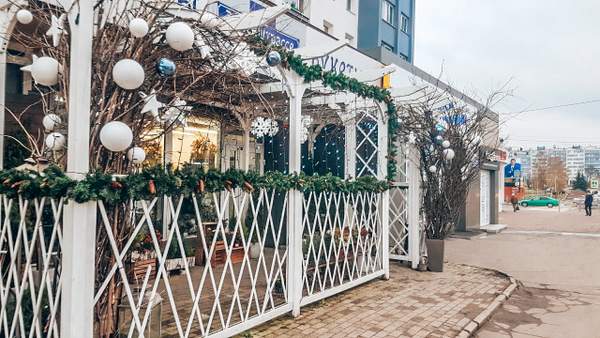 13- Before Christmas decorations of the city. If you face the “House of Soviets” on Shevchenko Street, you will see wonderful shopping areas decorated for the new year. In general, Kaliningrad is distinguished by its decoration of the city for the New Year. Dwarves, elves. Fairytale sails. 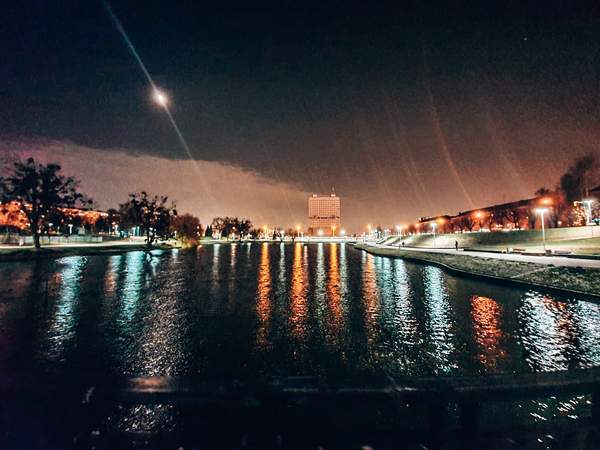 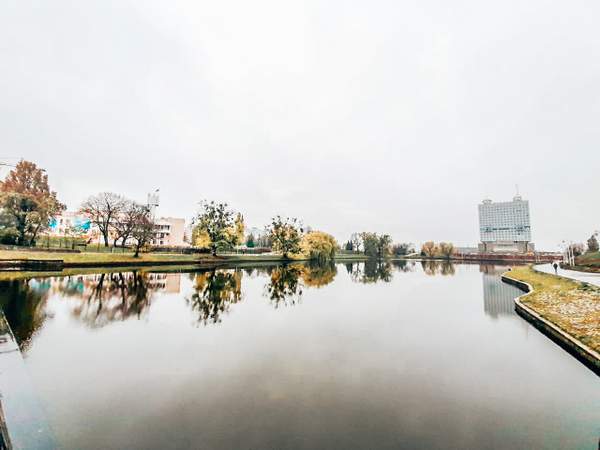 15- Bridge on the lower pond. On the reverse side of the bridge is a hotel, which illuminates almost the entire pond, and the refraction of light gives wonderful pictures. 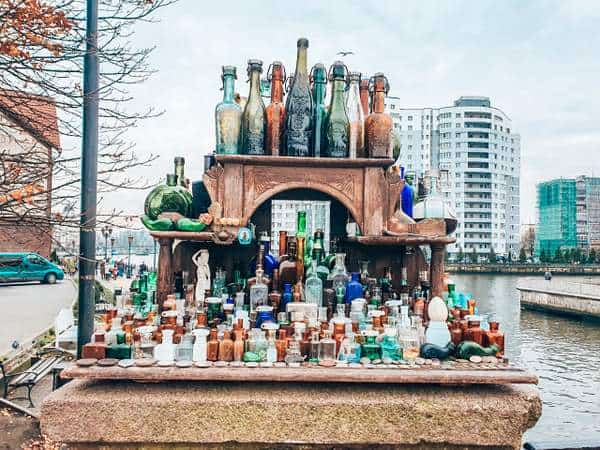 16- Honey bridge. On the honey bridge there is a shop selling old bottles found during excavations. You can buy as a souvenir. The bridge offers very beautiful views in both directions. 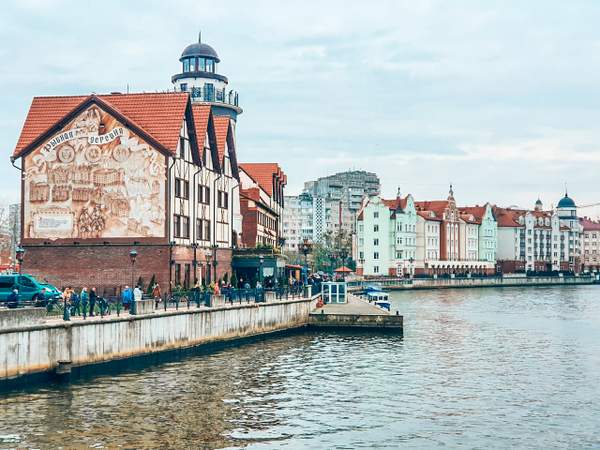 17- Fishing Village. One of the famous places of Kaliningrad, attracts many tourists and local residents. 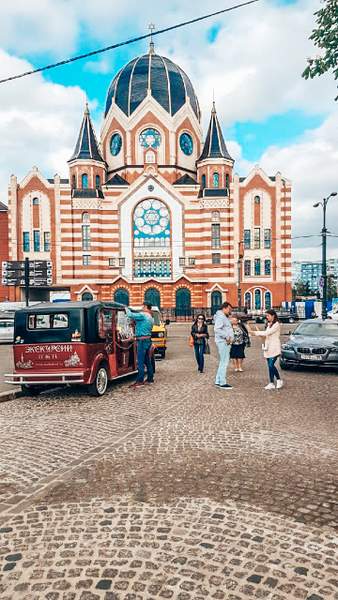 18- Synagogue. If you go down from the Honey Bridge from Kant’s Cathedral, you will come across a temple. Impressive and holy place. 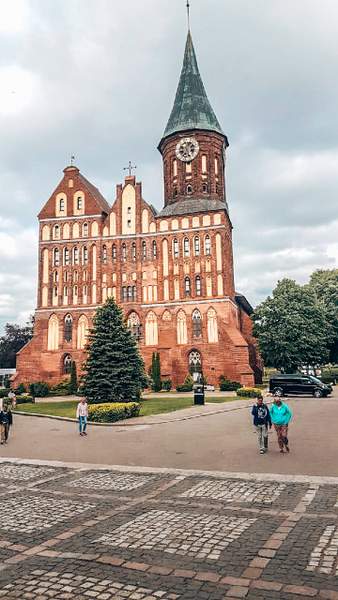 19- Cathedral of St. Kant. It is probably no secret for everyone that this is the most visited place in the city. Various holidays and events are held here on the island. Near the cathedral there is an excellent lawn in the form of a park where everyone loves to spend time. 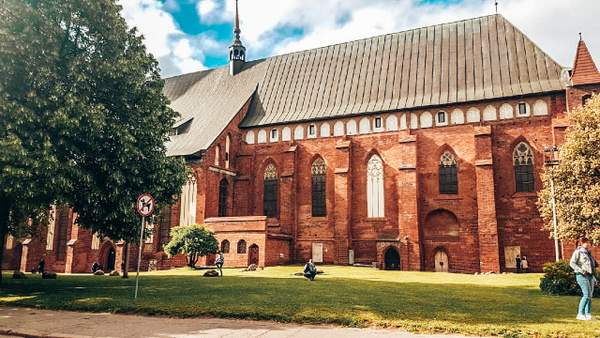 You can follow us on Your Rus Telegram Chanel