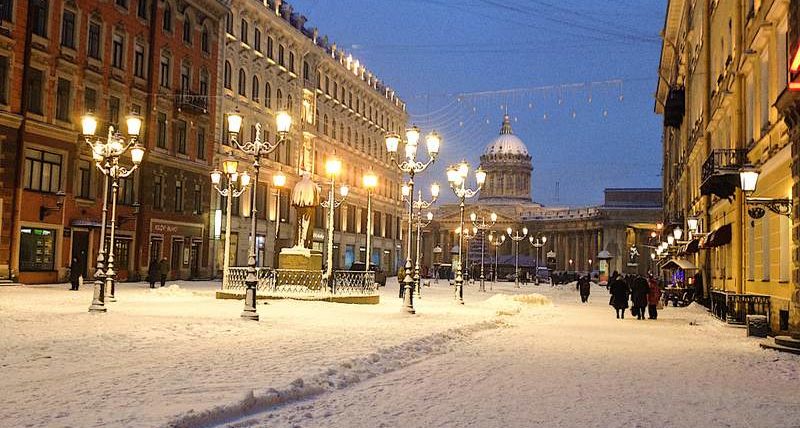 St. Petersburg is beautiful at any time of the year. Of course, the St. Petersburg is famous for summer white nights, when “one dawn hurries to change another, to give half an hour to night”
But even in winter it is beautiful and interesting. On clear days, the sun wanders along the horizon, and dawn turns into sunset.

St. Petersburg the capital of the Russian Empire

St. Petersburg is the capital of the Russian Empire. He is now the same as 100-200 years ago. It is easy to imagine yourself in that palace era, visiting the mansions of the nobility, going to a concert at the Mariinsky Theater or going shopping at the Kuptsov Eliseevs’ shop.

In St. Petersburg, imperial luxurious temples: the bright Savior on Blood, similar to the Faberge egg, the Kazan Cathedral with its colonnade and the majestic St. Isaac’s Cathedral. The latter was built for forty years, perhaps because the architect Auguste Montferrand was predicted that he would die when the construction was completed.

St. Petersburg is not in vain called the “cultural capital”. There are so many museums. The most famous and must-see is the Hermitage. After all, this is the second largest art museum in the world. The Russian Museum is a wonderful collection of works by Russian artists. It is worth to come here at least for the sake of Aivazovsky.

You can walk around St. Petersburg for a very long time and a lot on the bustling Nevsky, granite embankment or the Summer Garden.

St. Petersburg has many secrets and legends. Does the Bronze Horseman revive at night? Is Rasputin’s shadow walking around Gorokhovaya? And does the ghost of Paul I manage in the Engineering Castle? No one knows for sure, but rumors of strange and mystical incidents are circulating in the city.

Excursions on the roofs are very popular in St. Petersburg, although they are not very legal. View the city from a height by climbing the colonnade of St. Isaac’s Cathedral, and also in the city there are many restaurants with panoramic views.

Despite its historicity, St. Petersburg has many modern spaces. Such as the Erarta Museum of Modern Art, the loft project Floors, the island of New Holland or Sevcable port. And if you get out of the subway at Novokrestovskaya station, then you may not understand at all that this is still the same city. You suddenly find yourself at sea with screaming seagulls. Here you can stroll along the beach of the 300th anniversary park and admire the skyscraper of the Lakhta Center, which is popularly called “corn”

St. Petersburg is imperial and modern, pompous and romantic, measured and noisy at the same time. This is a very beautiful city that you can visit an infinite number of times, and always want to return.

You can also see our old article about St. Petersburg

To visit Russia and see this great city, you can request: Visa invitation – from our website YourRus

Travel to Russia for new year’s eve 2020 and Christmas